NOTE: The text of this page is released under the Creative Commons Zero Waiver 1.0
(https://creativecommons.org/)

Born in Los Angeles on October 18, 1932, John Biggs received his Masters degree in composition from the University of California at Los Angeles, doing further study at the University of Southern California and the Royal Flemish Conservatory in Antwerp, Belgium. His teachers include Roy Harris, Lukas Foss, Ingolf Dahl, Flor Peeters, Halsey Stevens, and Leonard Stein. As an educator, he has taught at Los Angeles City College, UCLA, and UC Berkeley. He also served as composer-in-residence to six colleges in Kansas under a grant from the Department of Health, Education, & Welfare. As a performer, he founded the John Biggs Consort, which toured internationally under Columbia Artists Management, specializing in medieval, renaissance, and 20th century music. As a composer, he has won numerous awards and honors including a Rockefeller Grant, Fulbright Grant, Atwater-Kent Award, ASCAP “Serious Music Award” every year since 1974, and a number of “Meet the Composer” grants from diverse parts of the United States. 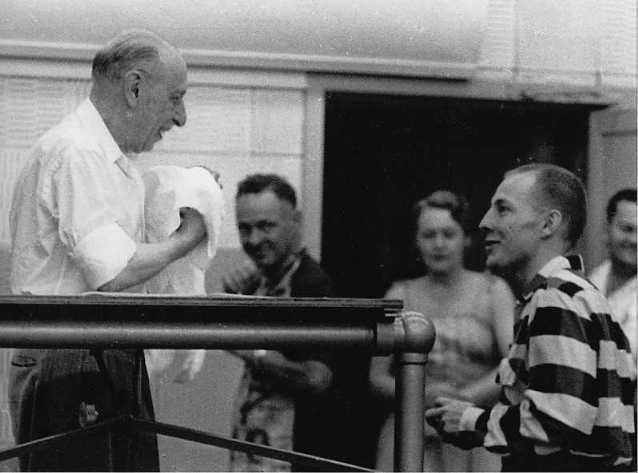 American Folk Song Suite
THE REGISTER (Santa Ana, CA) “---colorful and resourceful.
The piece is deftly and fluently made, undemanding and agreeable to listen to.”
CASA MAGAZINE (Santa Barbara, CA) “The highlight of the Men's Chorale segment, however, was John Biggs' American Folk Song Suite, whose four descriptive movements colorfully jumped off the page and into the audience imagination.”

The Ballad of William Sycamore
LOS ANGELES TIMES “---solid, accessable, emotionally resonant---”.
VENTURA COUNTY STAR “--stylish suggestion of vast spaces and ingrained strength proved compelling.”
BORIS BROTT, conductor, New West Symphony [letter to the composer]
“I thank you from the bottom of my heart for producing a work of such colour, imagination, immediate
accessibility and yet invention and novelty for the opening of the New West Symphony’s first season.”
CLASSICS TODAY.COM “ ---Biggs smartly alternates recitation with long passages of independent music so that the result is very enjoyable.”
THE GRAMOPHONE: “---the bumptious spirit is likeable---and the final stanzas are affectingly set.”

Concerto for Cello & Chamber Orchestra
LOS ANGELES TIMES “With all due respect to Bach, Handel, and Telemann, ---the most memorable music of the evening--probing intensity---Stravinsky-ish touches yield to lyricism.” “It is a modernist essay, tense yet engaging.”
VENTURA COUNTY STAR: “--the highlight of the evening---the entire concerto has the touch of a composer whose classical depth is succinctly, and beguilingly restated in contemporary terms.”

Concerto for Orchestra
VENTURA COUNTY STAR: “---sustained, sophisticated, and serious---”
FRANK SALAZAR, CONDUCTOR, VENTURA COUNTY SYMPHONY: “It is a deserving work that should be in everyone’s repertoire.”

Concerto for Violin & Classical Orchestra
SANTA BARBARA NEWS PRESS “---an excellently crafted composition, vitally rhythmic, appealingly melodic, and harmonically amiable.” “---do not be astonished if one day it finds itself alongside the great violin concertos of the musical world.”
AMERICAN RECORD GUIDE“---tuneful and joyous - - - with a finale indebted to of all people Erich Wolfgang Korngold.”
NEW MUSIC CONNOISSEUR “expressive - - - rhythmic - - - lylting - - ”

Sousaphernalia
LOS ANGELES TIMES “- - - filled with hope and wistful reflection of tunes gone by.” “- - - a tapestry of color and warmth.”
VENTURA COUNTY STAR “- - - a delightful dance through some of bandmaster Sousa's most familiar themes, woven into a texture that adds a bit of introspection.”

Symphony No. 1
LA METROPOLE: “Full of humor and drive, the work gave proof of a solid craftsmanship.”
DE NIEUWE GAZETTE: “---he speaks a fresh, modern language with a remarkable balance of reason and feeling.” “---without a doubt a masterful piece of work."
VOLKS GAZETTE: “---the indisputable high point of the concert.”
GAZETTE VAN ANTWERPEN: “---a cunning that reveals technical mastery. We are in contact with a talented composer whose reputation is sure to grow.”
CLASSICS TODAY.COM “---quite marvelous.” “---a recognizably “American” musical language full of zesty syncopations and bouncing rhythms.”

Symphony No. 2
CLASSICS TODAY.COM “---innate charm and melodic appeal---”. “Its opening idea, a winding melody for flute, is quite haunting and Biggs uses it very skillfully to bind together the work’s episodic structure.”
THE GRAMOPHONE: “---the work is suffused with a serene lyricism---.”“---an attractive and well-crafted work that deserves to be more widely known.”
CASA Magazine (Santa Barbara, CA): “---immensely satisfying, extremely beautiful, and profoundly moving---.”“---truly captured the hearts, minds, and imaginations of the performing musicians as well as the audience.”

Triple Concerto
SOCIETY FOR AMERICAN MUSIC “---a truly remarkable showcase for horn, trumpet, and trombone. ---exciting and turbulant---bound, hopefully, to become a standard in the world's concert halls.”
FORT WORTH STAR TELEGRAM “---the contrapuntal textures of Renaissance choral music echo in this concerto.”
SANTA BARBARA NEWS PRESS “---vigorous, and cleverly written---gave evidence of a genuine talent.”
FANFARE MAGAZINE “---a brilliant vehicle to demonstrate the skill of the soloists.” “---an elegant central Sostenuto---.”

Variations on a Theme of Shostakovich
LOS ANGELES TIMES “---highly accessable---.” “Driving ostinatos and high energy attest to Mr. Biggs’ affinity for the music of Shostakovich.” “---the work emerges ebullient and optimistic.”
SANTA BARBARA NEWS PRESS “There is no doubt that Biggs captures the essence of the Russian composer.” “---there is a lightness, a vivacity, and at times a devil-may-care feeling. ---the orchestration is bright, spirited, and rhythmic---.”
MAURICE ABRAVANEL (conductor, Utah Symphony)“---a very friendly piece. ---so completely
organic. It certainly makes for enjoyable listening.”
CLASSICAL MUSIC WEB “---a deeply felt tribute to the Russian composer---”. “---lyricism, bitter-sweet irony and rhythmic energy, --American to the core. A quite substantial, earnest and honest piece of music that deserves to be better known.

Fantasy on a Theme of Rameau
VENTURA COUNTY STAR “--concert highlight” “--a work of considerable wit and charm.”

Invention for Piano & Tape
CLEVELAND PRESS “It was notable for its rhythmic clarity & for its relative simplicity in these troubled complex times.”
TYROLER NACHRICHTEN (Innsbruch, Austria) “In a truly modern idiom, the combination of piano and tape here makes a veritable orchestral impact.”
SANTA BARBARA NEWS PRESS “---lyrical---expressive and rhythmic---with realistic and rather awesome sonic effects.”

Invention for Viola & Tape
LONDON TIMES “---the perfect foil for Bach and Brahms.” “---both captivating and stimulating.”
THE TRIBUNE (Nassau, Bahamas) “---the highlight of the concert.”
VIOLA RESEARCH SOCIETY (British Branch) “---an absorbing study in contrasting sonorities and rhythmic interplay---”.
THE MIAMI HEROLD “--hauntingly poetic in its evocation of children’s voices and electronic sounds--”

Medieval Dance Suite -and- A Renaissance Bouquet
THE VERDEHR TRIO: “These are two delightfully original staples! They are always a pleasure to perform, and have continued to be audience favorites.”
FANFARE MAGAZINE: “---charming additions to the repertoire.” “---more than welcome on a chamber recital.”

American Folk Song Suite
THE REGISTER (Santa Ana, CA) “---colorful and resourceful. The piece is deftly and fluently made, undemanding and agreeable to listen to.”

Canticle of Life
ALTON [Illinois] TELEGRAPH “---rising to comic heights--and to lyric joy of great appeal---”.“---both spirited in mood and well coordinated to both eye and ear.”
SANTA BARBARA NEWS PRESS “---a genuine work of art.” “---a splendid composition.”

Mass for Our Time
SANTA BARBARA NEWS PRESS “---stunningly beautiful---a masterpiece---powerfully inspired.”
VENTURA COUNTY STAR “--a pantheistic bouquet.” “--refreshingly approachable.” “The poetry is positive, strong, and unincumbered. So is the music.”
SANTA BARBARA INDEPENDENT “This is a magnificent, highly charged work.” “---an irrefutable assertion of the human spirit.” “There was scarcely an eye to be found without its glint of tears as the Agnus Dei whispered to a close---”.
CHORUS (The magazine) “---an accessible, enjoyable half-hour work---” “The neo-classical harmonic language is solid---”

On The Brink
LOS ANGELES TIMES “---aurally capsulizes the Age of Anxiety.”
CALIFORNIA JEWISH VOICE “---devilishly clever.” “---one of the most successful, coherent “tape” concoctions to be heard.”
SANTA ROSA [CA] PRESS DEMOCRAT “---a tremendously effective use of the medium.”

The Web of Life
VENTURA COUNTY STAR “--most impressive in its vocal-instrumental blend,--” “--[it] demonstrates Biggs’ ability to slip into a culture and philosophy and musically validate it from the inside out.”


LOS ANGELES TIMES “Biggs conveys a flowing, sophisticated musical language that savors witty wordplay, a sly irreverence and an underlying tenderness - the innate hallmarks of Wilde’s piece.”
THE REPORTER (Thousand Oaks, CA) “Biggs’ music is at once intricate, varied, and playful.” “---an excellent job of integrating Oscar Wilde’s linguistic modes into his lyrics---so the piece appears almost seamless in terms of authorship.”

SANTA BARBARA INDEPENDENT “I don’t know how many comic operas have been written in this century - especially comic operas that are actually funny - but the number has just increased by one.” “---a comic complexity which we haven’t heard since the days of Rossini or Donizetti.”
[LETTER TO THE EDITOR]: "Finally, an opera for people who don't like opera!" Charles Gallagher, Santa Barbara, CA
VENTURA COUNTY STAR “In a rare magical moment on a local stage, all elements blend perfectly---”.“Ernest Worthing isn’t simply an opera for the moment. It deserves a larger audience and a longer run.”
[LETTER TO THE EDITOR]: ". . the singing was satisfying and the score was a delight to listen to. D. M. Spaulding, Ventura, CA


Hobson’s Choice
NOTE: In addition to the reviews below, the Los Angeles Times, in its December 29th, 2000 edition, named Hobson's Choice as one of the “High Notes” of the year.
LOS ANGELES TIMES “--an accessible and artful new period-piece opera.” “--he charts a neoclassical course in his writing, but with little twists along the harmonic path.” “--it succeeds on many levels.”
SANTA BARBARA INDEPENDENT “---the exact play to turn into a John Biggs opera.” “---the vocal writing is brilliant, with every word of the dialogue clearly understood and given its proper emotional weight.”
VENTURA COUNTY STAR “---a wide ranging score that provides many amusing moments and some excellent ensemble work.” “---delightful---”